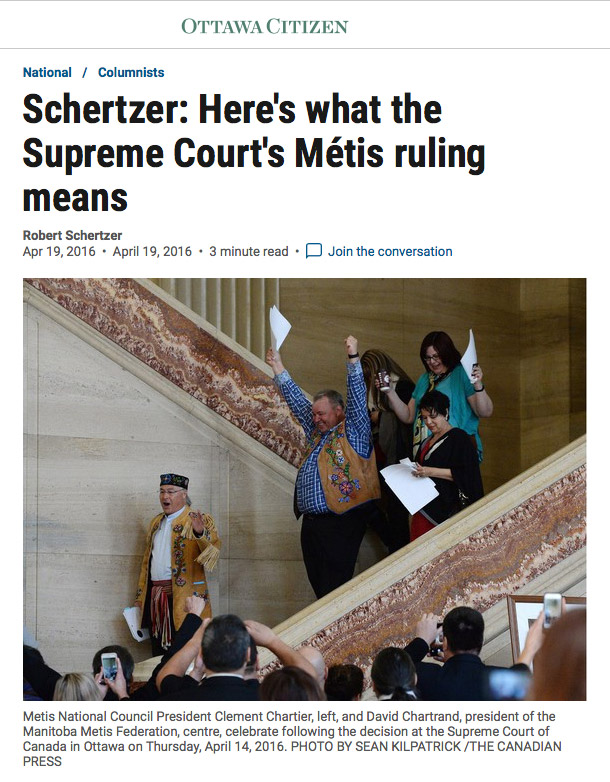 Ottawa Citizen Article: "...the legal definition of Métis established by the Supreme Court in a 2003 ruling has been broadened to now include those that self-identify as Métis and have a historic connection to a Métis community...

"This ruling will change the way our federation operates and the place of almost 700,000 Métis and non-status Indians in that system. It is a somewhat paradoxical decision: Including these groups as "Indians" under Section 91.24 of the Constitution has a patriarchal consequence of making them the responsibility of the federal government (just like banking or postal services, for example) something that has not worked out well for other indigenous groups; but it also extends a status to negotiate their relationship with the federal government."

The CAMH's (Center for Addiction and Mental Health) National Aboriginal Day Celebration included the presentation of the Chapin A'sin Elder Vern Harper Award for Excellence in the Provision of Culturally-Based Practice.

This year's winner was Elize Hartley, Elder-in-Residence with McMaster University in Hamilton.

"Our youth need identification. I found that when I went into the high schools and presented the aboriginal ways and ceremonies and talked about ceremonies, talked about tradition, talked about nation, those people, those young people got an identity," said Hartley.

"When we started a few years ago talking and bringing the cultures they said, 'I don't know who I am'. And I said, 'We'll find out', and so we did. They just seemed to bloom."


"Native women are missing because of the way they live. Live in abject poverty, not educated well enough to get a job that pays them enough to survive. Most of them are single moms who raise children - what do they do? Go and become prostitutes. These women work for whatever they can get. The idea that they can do that plays on their mind - what do they do? Drink and drugs. It's a lose-lose situation. I get involved with Aboriginal youth and talk to them about their identity - if you can show people their identity, they have something to hang on to. I think more people need to know that in order for Aboriginal people to get on their feet, we have to start looking at children in the elementary schools. We have to work together to make sure that the history of Canada, for instance, is properly written and shows what actually happened to Aboriginal people. Human Trafficking is at the basis of a lot of troubles for the Aboriginal women. The system doesn't work for them, it works against them. We have to start looking at education for Aboriginal students. Once Aboriginal students get their diploma, they can go to college. Somebody needs to do the foot work." - Elize Hartley