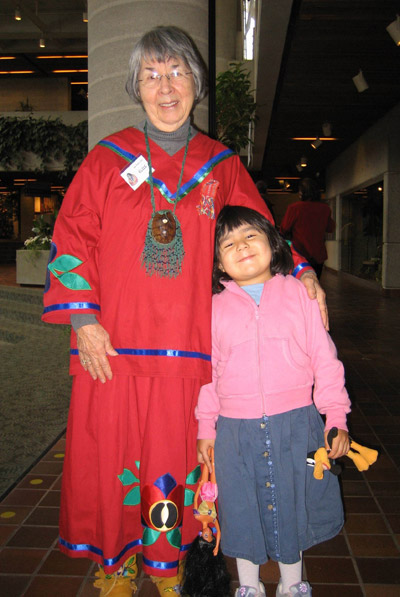 
1925-2020 - Until her passing in 2020 at the age of 95, our Elder, Elize Hartley, was in regular weekly attendance at schools on specific days each week and at all special events. The Elder answered students' questions, gave guidance, and acted in the role of spiritual advisor to students. Students were encouraged to speak with the Elder on any issues or concerns dealing with their school experience. The Elder also lead students in prayer and smudging ceremonies. Comments from students indicated that they would make a special effort to attend school on days when Elders were present and found them to be comforting. Topics such as traditional medicines and kokum stories were shared. 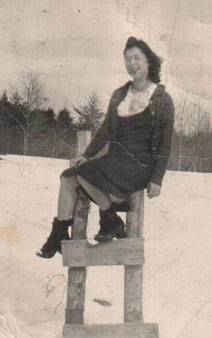 The family of Elize Hartley is deeply saddened to announce the passing of our mother Elize Hartley (Cauchy, nee Huppé) at Parkview Nursing Centre on April 3, 2020. She was born in Vassar, Manitoba, one of ten siblings born to Joachim Huppé and Eva Huppé (nee Bacon). She was predeceased by her sisters and one brother, husbands Patrick Cauchy and Craig Hartley, son-in-law Wayne Wilson, grandson Dakota Kavanaugh and granddaughter Sharri Kimberley Ratcliff.

Elize was a Red River Métis, with family history in the founding of the Province of Manitoba and in the historical struggle for cultural preservation and advancement of her people. She was a lifetime warrior-woman in Indigenous affairs, founding the Métis Women's Circle and working tirelessly for healthy Indigenous women and their families across Canada. She was an honoured woman in her community and nationally. We are proud of mom and her ability to adapt to the magnitude of change she witnessed; from simple farm life to the technological age. Her legacy continues. We wish to express our gratitude to Parkview Nursing Centre for the extraordinary nursing care and kindness given to our mother in her last days.

Cremation has taken place and a Celebration of Life will take place at a later date. In lieu of flowers, donations to the Métis Women's Circle would be appreciated by the family.

April 6, 2020 - ONWA Celebrates the Life and Contributions of Elder Elize Hartley Thunder Bay, ON - The Ontario Native Women's Association (ONWA) would like to take this opportunity to offer our condolences to the family of Elize Hartley, "Listening Fox Woman." Ms. Hartley, a proud Red River Métis, touched countless lives in her commitment to cultural preservation and the well-being of her people. Family, friends and community celebrate her passion, strength, and resiliency as she travels to the spirit world.

Elize Hartley was a long-time member of the Ontario Native Women's Association. She was a founding member of the Métis Women's Circle located in Hamilton, ON. Her work focused on working in community to ensure that Métis and Indigenous women had access to much needed programs and services. She was very passionate about ensuring the history of the Métis people and Métis ways of knowing were shared throughout the community. As an author and storyteller, Elize knew the importance of knowing who you were and where you came from.
Her gift was ensuring that others knew this as well. "Elize embodied Indigenous women's leadership. Her accomplishments were many. A member of the ONWA Board of Directors, Elize also served on the ONWA Grandmother Council and was the representative for the southern region for many years. She served as a leader who selflessly contributed to the richness of the lives of Indigenous women across the country. Her life promoted and celebrated Métis culture, helping new generations on the path to rediscovering their identities and for this we are forever thankful," stated ONWA Executive Director Cora McGuire-Cyrette.

ONWA Board President Dawn Lavell-Harvard remembers, "She was not just a role model, she was an inspiration. She always had the highest of expectations for all of us and she never gave up on making sure we achieved our dreams." It is the beauty and context of lives well lived and world's changed by the passion and strength of women like Elder Hartley that we hold dearly at times like this. 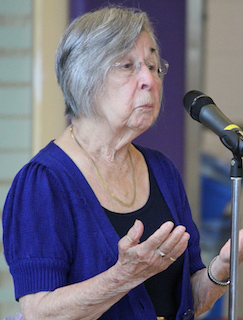 
The CAMH's (Center for Addiction and Mental Health) National Aboriginal Day Celebration included the presentation of the Chapin A'sin Elder Vern Harper Award for Excellence in the Provision of Culturally-Based Practice.

This year's winner was Elize Hartley, Elder-in-Residence with McMaster University in Hamilton.

"Our youth need identification. I found that when I went into the high schools and presented the aboriginal ways and ceremonies and talked about ceremonies, talked about tradition, talked about nation, those people, those young people got an identity," said Hartley.

"When we started a few years ago talking and bringing the cultures they said, 'I don't know who I am'. And I said, 'we'll find out', so we did. They just seemed to bloom." 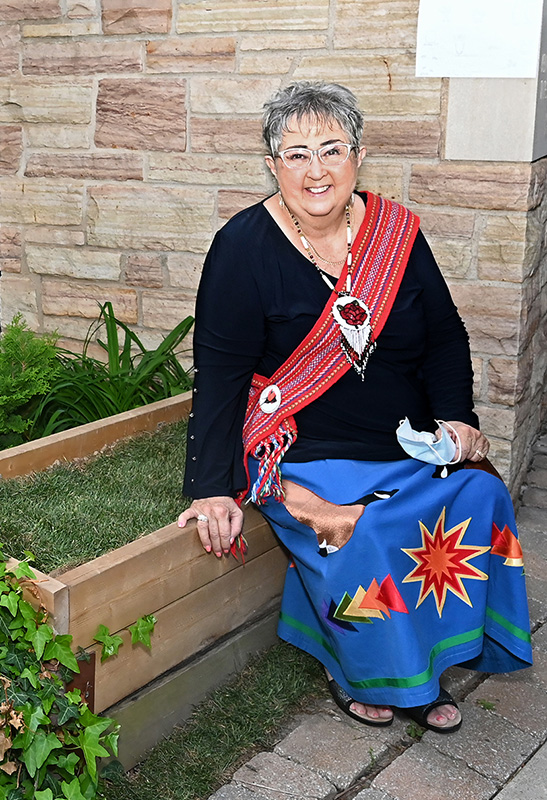 A member of the Manitoba Métis Federation, Dr. Leclair has current ties to family and ancestors in Red River and Turtle Mountain and is affiliated with the Ontario Native Women's Association. For 25 years, she acted as Vice President of the Métis Women's Circle in Hamilton, Ontario.


We are a circle of Métis women who support, educate and empower our women. We acknowledge Creator and the wholistic relationship between Earth and the gifts She provides. Through reciprocity and the healing journey, we can help our people reclaim and celebrate our cultures, histories and identities.
Statement of Purpose, Métis Women's Circle, 1999


The Métis Women's Circle comprises a dynamic group of women who share Aboriginal heritage and honour their traditional teachings. We work to build community amongst urbanized Aboriginal women and their families locally and nationally. Our research projects are far ranging and deal with those social issues impacting Aboriginal women in particular.
Native and Non-Native women are welcome to join the Métis Women's Circle through our four levels of membership. See below for more details. Membership is renewed annually.


What sets us apart from any other women's group? We are Aboriginal women who have to create positive meanings around the terms of identity that we have inherited from both our parent groups. Métis oral tradition teaches us that we are never entirely "other," that our social and spiritual identities have always overlapped with those of our tribal relatives, other entities and our European relations in shifting patterns of creative necessity. Métis who remember bush ways remain connected with our first teacher, the land. In this way, we enact an Aboriginal ecology which adapts to, rather than assimilates, the larger common culture.

We have chosen the period of 1812-14 to recreate the indigenous plantings in the garden. At this time, there had already been a 150-year-long alliance between men of the fur-trade and Aboriginal women throughout the Great Lakes. Some historians estimate upwards of 15,000 residents of Métis communities south and west of Lakes Superior and Huron. By 1822, Michigan and Wisconsin, Minnesota, Illinois and Ohio also had distinctive and numerous Métis populations. In Upper Canada, the inhabitants of these Métis towns and villages were primarily traders. Trade, not agriculture, was at the heart of their prosperity. It took them on an annual journey from town to hunting grounds, to the warehouses of trading posts from Sault Ste. Marie, Niagara, Detroit and home again. Métis intermarriage with other villages (Americans called them "jack-knife" posts, run by a single trader) and with distant hunting bands expanded their presence. This mobility, combined with the natural blending of Aboriginal and settler ways, fostered a personal and group identity, an identity comprised of relationships with more than a dozen tribal peoples of Algonkian, Siouan and Iroquoian heritage as well as French and British.
The years 1812-14 represents a crucial time for Métis communities. As their distinctive dress, language, music, cuisine, architecture and technologies began to flower and spread outwards from the Red River, the older fur-trading settlements in Upper Canada began to collapse under the pressure from a flood of American and British settlers.

Our Métis midwife, Nokomis (grandmother) Beausoleil, was born around 1767. In 1812, we find her living at Brant's Ford, trading her knowledge of birthing medicines for goods from the village. Through her relatives she heard of Red Jacket, Tecumseh, Michikinikwa, and Tekarihogan. She heard of the great Iroquoian victory at the Battle of Beaver Dams in 1813 and the disturbing news of General Brock's death at Queenston Heights. For both Britain and the United States, the last of the colonial wars was an inconclusive contest. As Senecas fought other Iroquoians (brother against brother) in the white man's quarrel, Nokomis Beausoleil went about her work, gathering her medicines and helping settler women birth their children. Hot, dry weather, successive crop failures and scarcity of game affected all in the tiny hamlet of Brant's Ford during these years. What skills and knowledge did Nokomis possess which allowed her to survive and prosper? These are the questions we will be researching.


One consistent characteristic that describes the Métis is implicit in the name the Cree gave them o-tee-paym-soo-wuk, which means "their own boss" or "people who own themselves."

The teaching of chores is related to the learning of values and acceptance of responsibilities to oneself, home and one's family. Many traditional Métis communities had fond memories of daily chores and hard work in contributing to a steady supply of water and wood for their homes year round. The distinction of choices and consequences are both important lessons to be taught to children and youth. We each make choices in our lives on a daily basis, and we need give careful thought and reflection to the choices we make, as all choices have a consequence, whether positive or negative.

Métis horsemen were renowned for their skills with a horse; so much so that they taught their horses to dance the quadrille. The modern day Musical Ride of the RCMP incorporates this Métis inspired dance for their horses in their routine. The Métis lived neither a quiet nor sedate lifestyle and celebration was an important part of the culture. Horse racing, horse-trotting, and winter sleigh racing were also enormously enjoyed as good sporting activities. As a matter of Métis pride, it was also very important to have the horses outfitted with flashy beadwork and colourful saddlecloths.

Quote from Elize Hartley, Elder Métis Women's Circle, Hamilton: When asked about Métis women's sources of authority Elize refers to her childhood in the tiny village of Vassar in Manitoba and to the values and lifeways of her family. She says, "In those days it was all teamwork. The women knew exactly what they had to do in order to get the results they needed and the men knew that too. So, if the women needed a long table to feed loggers or wedding guests, the men knew that they had to go and get that wood and they picked a certain tree that would be the length the women wanted. It was teamwork and there was no cajoling or nagging. It was strictly business. The women did their job and the men did theirs and the end product was what the community made together." From "Strong Women Stories: Native Vision and Community Survival", p. 60, edited by Kim Anderson & Bonita Lawrence, Sumach Press, Toronto.